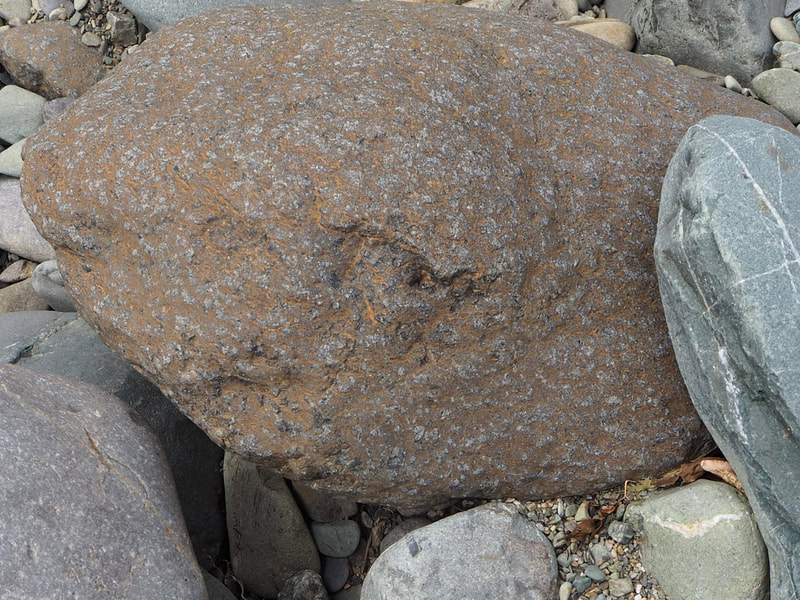 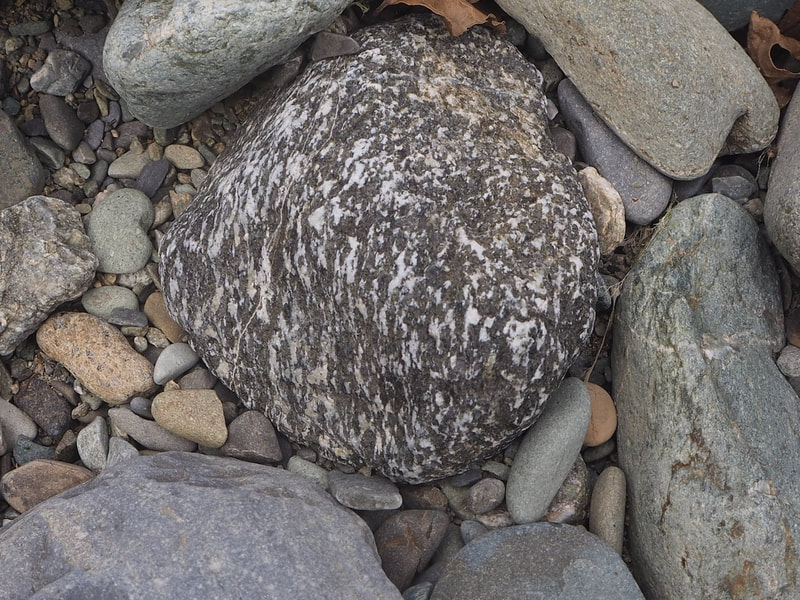 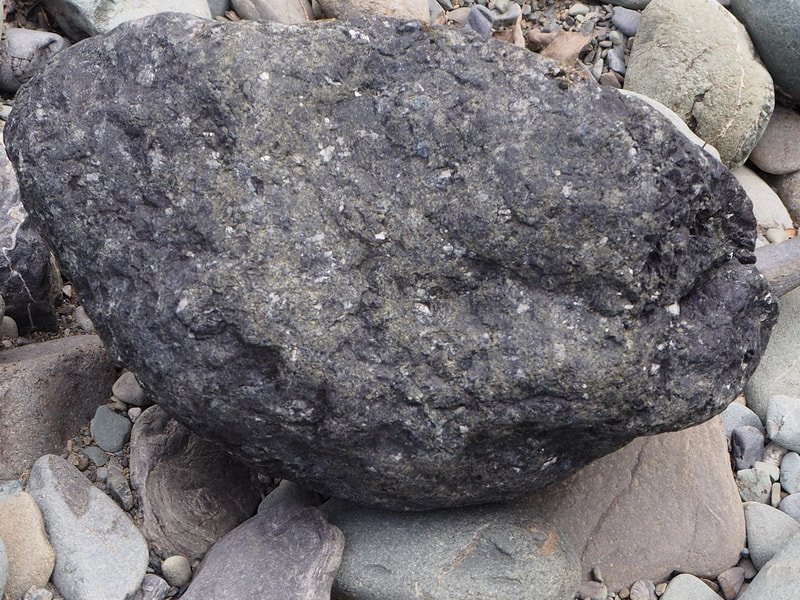 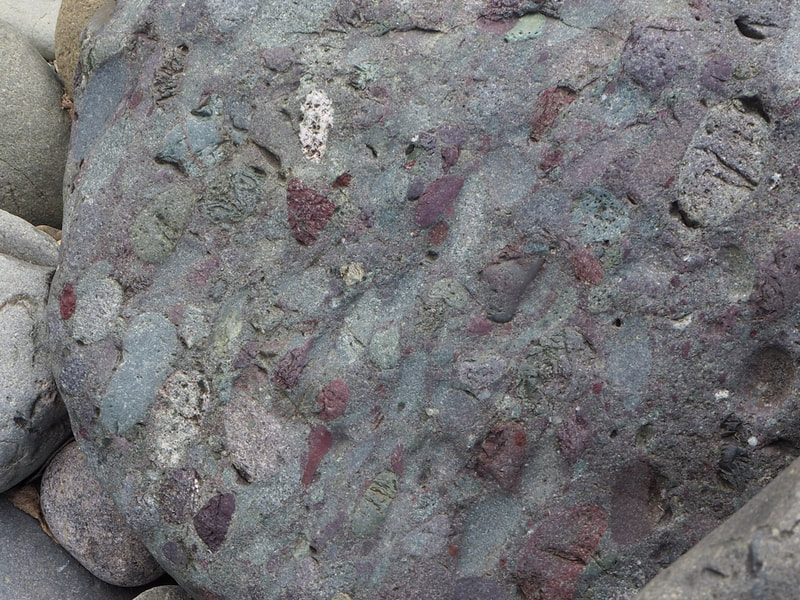 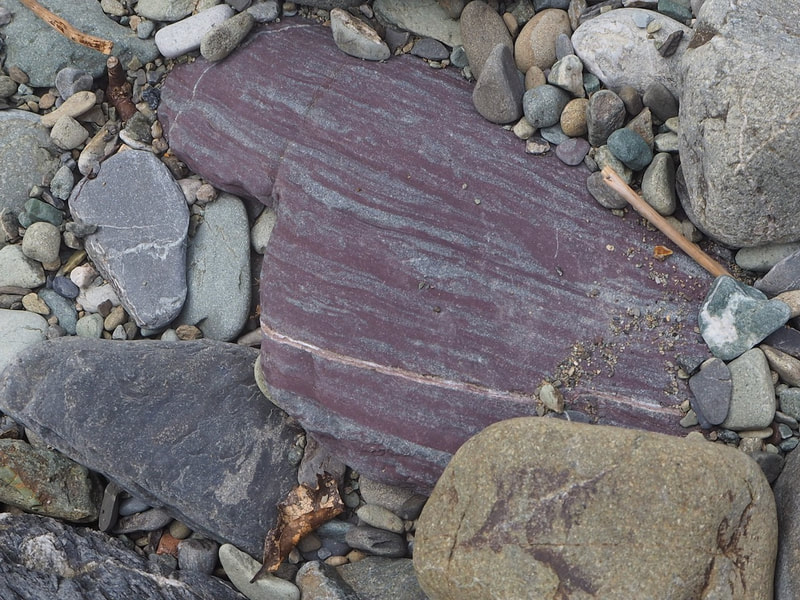 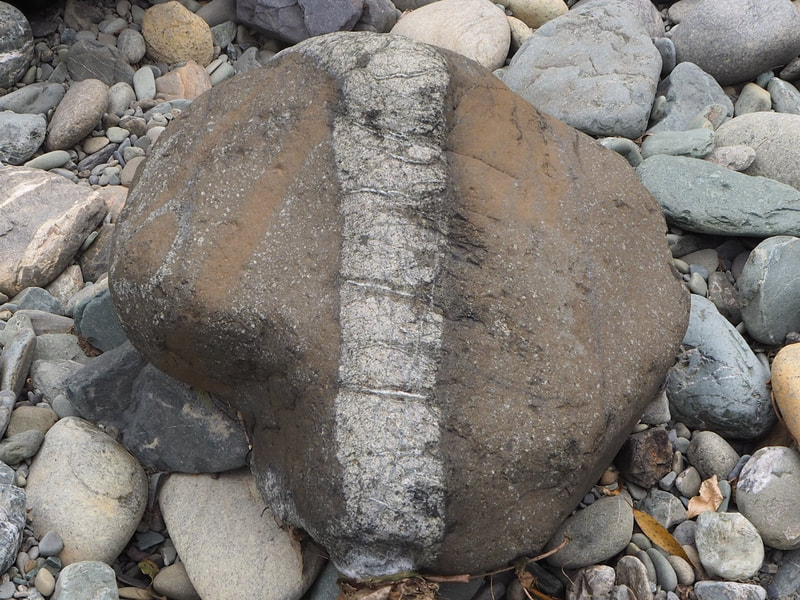 Rocks of the Wairoa Valley

The Wairoa Gorge is geologically interesting for many reasons. The river drains a catchment that includes a range of different geological strata, including:
​As a result, the gravels in the valley offer rich pickings for the rock-hunter. As well as sandstones and mudstones (including argillite), the gravels contain boulders of limestone, conglomerate, quartzite, basalt, gabbro, grossular, dunite, harzburgite, rodingite and serpentinite (see images above).

Good places to see the rocks in the gravels are at sites 3 and 4, in the map below. Site 6 provides access to the Patuki Melange, where many of the rocks can be seen in situ.
​
An explanation for this anomoly was eventually found when detailed mapping of the limestones was  carried out by Owen. He deciphered the ammonites into three, sequential zones and showed that the limestones were not in situ but were, in fact, olistoliths. These are large masses of older rock which have been emplaced into younger sediments, probably by sliding down the continental shelf. With this understanding, the stratigraphy of the rocks in the Wairoa Valley at last made sense.

Access to sections showing large olistoliths are scarce, though the limestone quarry at the north end of the Lee River (not open to the public) is cut into one of them. Smaller examples are visible, however, albeit mainly by their absence. At the Mead Road reserve in the Lee River (site 1 on the map below), for example, numerous cavities can be seen in the exposed Stephens Group rocks - made where blocks of limestone have been weathered out. 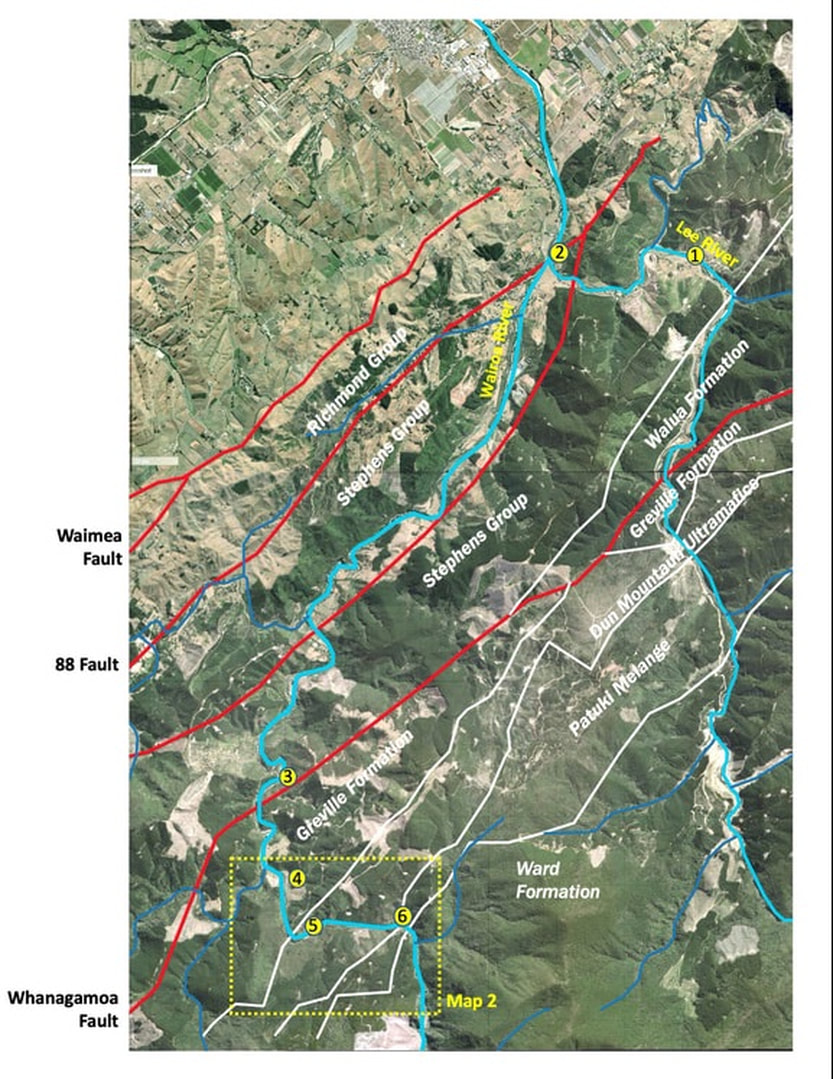 ​Geology of the Wairo Valley, showing sites referred to in text
The Great Dying

While resolution of the problem of the olistoliths made sense of the Triassic stratigraphy in the lower part of the Wairoa, it still left the dilemma of where the boundary between the Permian and Triassic rocks lay. This boundary has especial significance in geology, for it not only defines a division between different geological periods, but also marks the global extinction event known as the Great Dying.

The site of the Great Dying in the Wairoa valley hardly lives up to its name. It is difficult to locate for it is associated with no no obvious change in the rocks and there are no dead bodies lying around! Hidden within the sediments, however, is evidence of a dramatic change in climatic conditions that has relevance to the world today. The evidence comes in the form of the minute concentrations of a carbon isotope (C-13) preserved in the rocks. Measurements through the strata of the Little Ben Sandstone show a sudden dip in C-13 concentrations that may have lasted a million years or so. Changes in C-13 concentrations of this type are rare and because this one has been reported in a number of locations across the world its explanation must be global rather than local. The reason is believed to be the release of a large volume of methane from submarine clathrates..

Clathrates are ice-like accumulations of water and methane, formed by the bacterial decomposition of organic matter in an oxygen-deficient environment. They are found in permafrost areas and in deep oceanic basins at the outer edges of the continental shelf. In some circumstances - e.g. when the permafrost melts or the deep ocean water is disturbed in some way - the methane may be released into the atmosphere in a violent 'burp'. Methane is enriched with so-called isotopocally light carbon (C-12), so when a large release occurs, the proportion of C-12 both in the oceans and in the atmosphere increases slightly, while the proportion of heavier isotopes (including C-13) declines.. Because rocks hold and store the carbon as they form, they preserve the signal of these changes. This is the signal that was found in the Little Ben Sandstone.

Although the changes in atmospheric composition might seem small, their significance is huge. Methane is a powerful greenhouse gas, so a large release causes substantial and rapid global warming. This not only affects life directly but also sets off a positive-feedback effect: the warming caused by the methane results in more melting of the permafrost, and more upwelling in the oceans, thus encouraging yet further methane releases. Some evidence for this exists in the sediments in the Wairoa valley. About 10 million years after the first dip in C-13 levels, another dip occurs, indicating a second 'burp'. Other evidence comes from the fossil record. While the Permian bivalve Atomodesma is common in the strata below the first dip in C-13 levels, it vanishes afterwards. And in the strata that follow - the remainder of the Little Ben Sandstone, the Greville Formation and much of the Stephens Group - fossil remains are absent or sparse. It clearly took several millions of years for life of any abundance to become re-established.

What exactly caused the initial release of methane from the oceanic clathrates is not known for sure. A likely trigger, however, is mass slumping of material on the continental shelf as a result of tectonic activity. Again, some evidence for this this exists in the rocks of the Wairoa. for the Little Ben Sandstone appears to have been laid down in a shelf environment affected by repeated, large-scale submarine slides that formed overlapping fans of debris. Nevertheless, other triggers, such as a meteorite impact, cannot yet be entirely ruled out.
​
The location and geological setting of the Permian-Triassic boundary 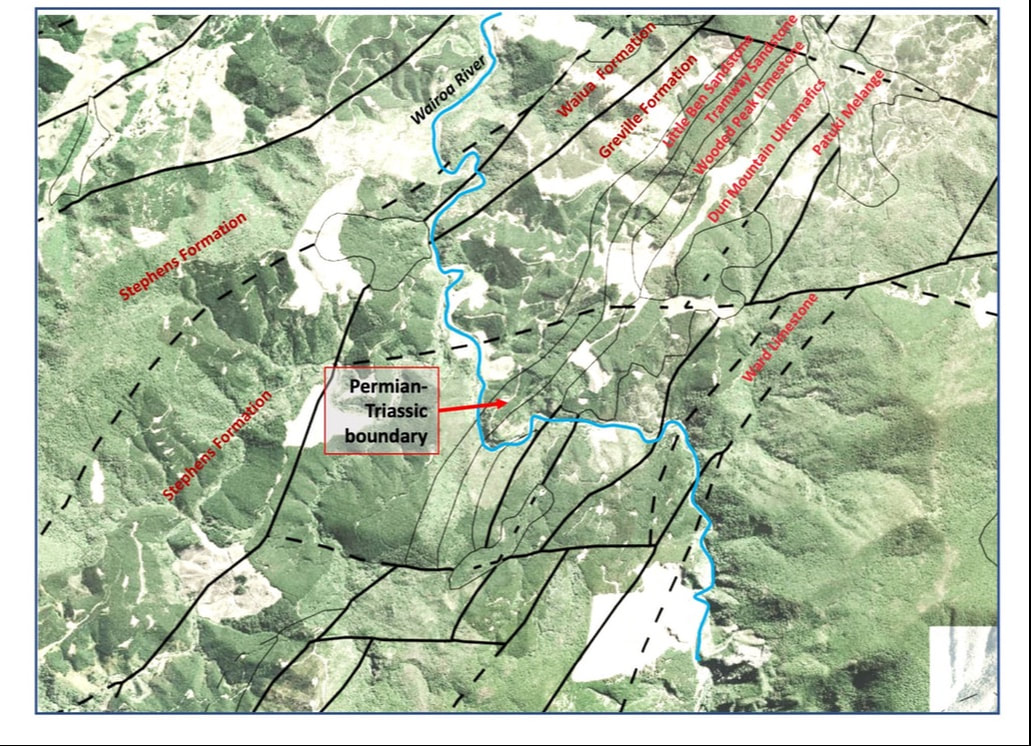 Geological features in the Greville Formation

As mentioned, the Greville Formation, which follows the Little Ben Sandstone, is generally lacking in fossils. Geologically, however, it has some interesting features which aren't always easy to explain. One of the most obvious of these is the cyclical nature of the deposition, with a repeated sequence of rather beautifully bedded fine sandstone or siltsone and mudstone with darker arjgillite bands. There are also numerous veins and lenses of calcite and quartz along with small-scale faulting which creates small (ca. 1-20 cm) and occasionally larger displacements in the bedding.

Based on these features, it can be surmised that the deposits formed through the action of turbidity currents moving down the gentle slope of the continental shelf. Conditions must have been relatively stable, however, for there are relatively few example of coarser debris (conglomerates or gritstones), and the bedding is often continuous and consistent over considerable distances and depths. We might, therefore, imagine the turbidity currents as broad, slow-moving plumes of slightly denser, sediment-laden water rather than as avalanches of any suddeness or force.
​
There are only two explanations that really work.The argillite fragements either fell into the fresh sediment from some nearby outcrop or cliff (perhaps shaken loose during earthquakes) or they were thrown there by an explosion of some sort. This latter idea may seem unlikely, but there are hints in the surrounding sediment that suggest it might be true. In places, for example, the thin and regular argillite bands suddenly change into a scattered area of ashaatttered pieces. In other areas the bedding becomes distorted into irregular lenses and 'pools'. In the more disturbed areas, calcium carbonate is often more abundant. One possible cause is therefore that, as they were forming, the beds were affected by upwelling calcium carbonate from reservoirs in the underlying rocks, which burst through the argilliute layers, scattered the debris and left a patchwork of carbonate in the voids. Such events are not unknown; similar processes have been described to explain dawsonite-bearing carbonate veins in mudstones in Japan.

Nonetheless, oOther mechanisms cannot be wholly discounted. For example, it is also possible, for example that - having been dewaterred and compressed as a result of shallow burial - the argillite were spontaneously shattered by earth tremors or by increasing pore water pressures in the underlying sands. Whatever happened, it is clear that it was contemporaneous with the process of deposition. It is also clear that these enigmatic features pose some interesting questions for the geologist and deserve further study.