As Gondwana and Euramerica come together, Zealandia experiences major igneous intrusions and tectonic upheaval - and periods of quiet sedimentation

In New Zealand, the Devonian was a period of mixed fortunes. Sedimentary rocks of Devonian age are confined to two small areas in the Buller and Tasman terranes, both formed during the Early Devonian. Soon after, the Buller and Takaka terranes came together during a phase of crustal collision and faulting. In Later Devonian times large areas of granitoid rocks were intruded on the West Coast and in the Buller (the Karamea Suite), while further east gabbro and diorites were intruded as the Riwaka Complex.

The sedimentary rocks of the Baton River area

The Baton River provides a natural transect through much of the lower Devonian sequence, which totals some 2700 metres in thickness. Studies by Willis (1965) divided these into seven members in relation to a series of shellbeds that can be widely traced through the area (see Figure 2). These were aligned from oldest in the north-west (where they overlaid the Ellis Formation, assumed to be of Silurian age) to youngest in the south-east, where they were faulted against Tertiary rocks. The Baton Formation rocks consist primarily of grey mudstones, with interbedded sandstones, limestones and  shale. Fossils are common, and include brachiopods, bivalves, gastropods, crinoids, corals and bryozoa, along with rare trilobites. Unlike the Reefton area, fish have not yet been found in the Baton River deposits. Deposition appears to have been in a relatively deep water, low energy environment, some way from the shoreline, and there is no evidence of any significant volcanic activity. 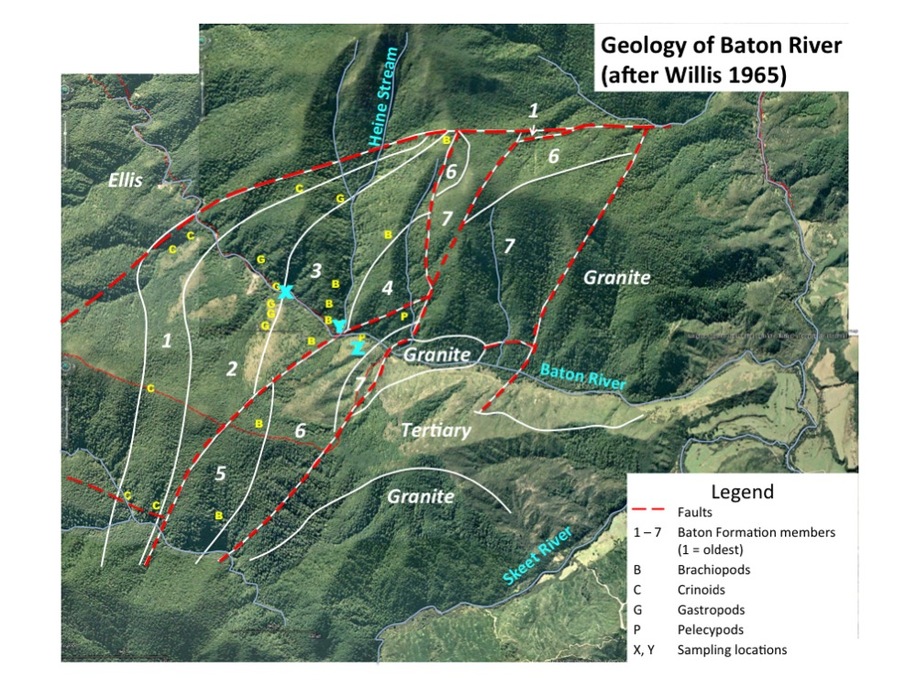 Figure 2. Mapping of Devonian rocks in the Baton River area (Baton Formation) by Willis (1965), showing main distribution of faults and shell beds
The sedimentary rocks of the Reefton area

Devonian sedimentary rocks are also widely exposed in the Reefton area, where they occur in a long, north-south trending block, straddling the Inangahua River. The deposits comprise mainly mudstones, with occasional beds and bands of limestone, sandstone, siltstone, quartzite and shale. They are overlain uncomfortably by Cretaceous coal measures, which have been worked in a number of mines around the area.

Eleven units have been mapped within this area, comprising a total thickness of 1,500 metres. ​As in the Baton River area, they contain numerous shellbeds, some of them packed tight with fossils, as well as more scattered fossil remains. Fossils include abundant brachiopods (especially Acrospirifer sp., Reeftonella sp., Chonetes sp. and Reeftonia sp.), along with bivalves, crinoids, corals, bryozoa and rare fish remains. The sediments and fauna together suggest that the deposits were laid down in a shallow sea that was subject to alternate transgressions and regressions, generating fluctuating off-shore and near-shore environments. In general, the deposits seem to have formed closer to shore than those in the Baton River area. 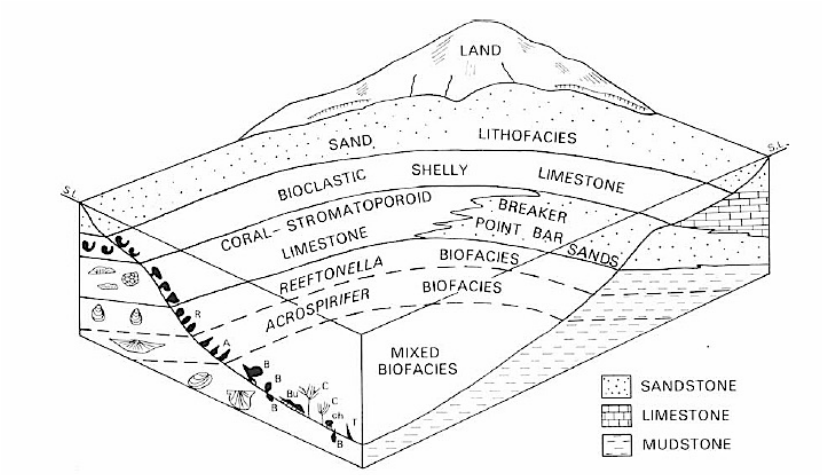 During the late Devonian, Zealandia became subject to intense igneous activity, as two large batholiths developed under the north-western corner of what is now South Island.

The Karamea Batholith intruded into the Buller Terrane, causing large-scale disturbance and metamorphism. The oldest intrusions appear to consist of biotite diorite, sometimes also including muscovite. The main body of the batholith, however, was formed of acid, slow-cooling magmas, which created a distinctive pink, white and black, moderate to coarse grained granite. It is composed of large crystals of white or pink potassium feldspar in a matrix of quartz, plagioclase, biotite and in some cases muscovite. Dating of zircons in the granite gives a date of 358-388 million years before present - i.e. in the Late Devonian.

Further east, in the Takaka Terrane, similar granitoid rocks were emplaced within the Silurian and Devonian rocks (the Onekaka Schist, Baton Formation, Arthur Marble and Wangapeka Formations). The intrusives, named the Riwaka Complex,  comprise a layered sequence of diorites, gabbros and associated lithologies. At the base are diorites, which grade laterally into clinopyroxene and hornblende gabbros, pyroxenite and amphibolite (the Campbell Gabbro), and southwards into olivine clinopyroxenite. The Brooklyn Diorite, above, comprises pyroxene-biotite and hornblende-quartz diorites, with amphibolite.

The close similarities between the rocks of the Riwaka Complex and the Karamea Suite suggest that the two intrusions were derived from a single source. The dates are also similar - centring around 362-383 million years BP - and indicate that they occurred at the same time. Together, these similarities also suggest that the two terranes were already in their current positions when intrusion occurred, in which case the best estimate of a date for suturing (i.e. joining) of the terranes is the mid-Devonoan. Nevertheless, it is plausible that emplacement of the batholiths played a part in forcing the terranes together, in which case closure may have occurred in the Late Devonian. However it happened, union of the two terranes represents the end of a significant geological journey, for differences in their geology suggest that they must have initially formed several hundred kilometres apart.

​Access to the Devonian rocks in the Baton River area is via Baton Valley Road, and the walking track that runs from its end, along the Baton River. Good sections are visible both by the pedestrian bridge across the Baton River (point Z on Figure 2) and along the track, and in the gorge, to the west of that point. The Skeet valley also contains numerous sections. Access is via public rights of way along the river; for details, visit the Walking Access Mapping System website.

Access to the Devonian outcrops in the Reefton area is mainly via the Murray Creek track and Tram Track, starting at the Golden Fleece Battery at Blacks Point (NZTM: 1507683, 5335111). Sections can also be seen in road cuttings in this area.

Bradshaw, M.A. 2000 Base of the Devonian Baton Formation and the question of a pre‐Baton tectonic event in the Takaka Terrane, New Zealand. New Zealand Journal of Geology and Geophysics 43, 601-610.

Willis, I. 1965 Stratigraphy and structure of the Devonian strata at Baton River, New Zealand. New Zealand Journal of Geology and Geophysics 8, 35-48.